Duncan Hunter has been involved in an ongoing campaign fraud case, in which he's accused of misusing $250,000 in campaign funds for personal use. 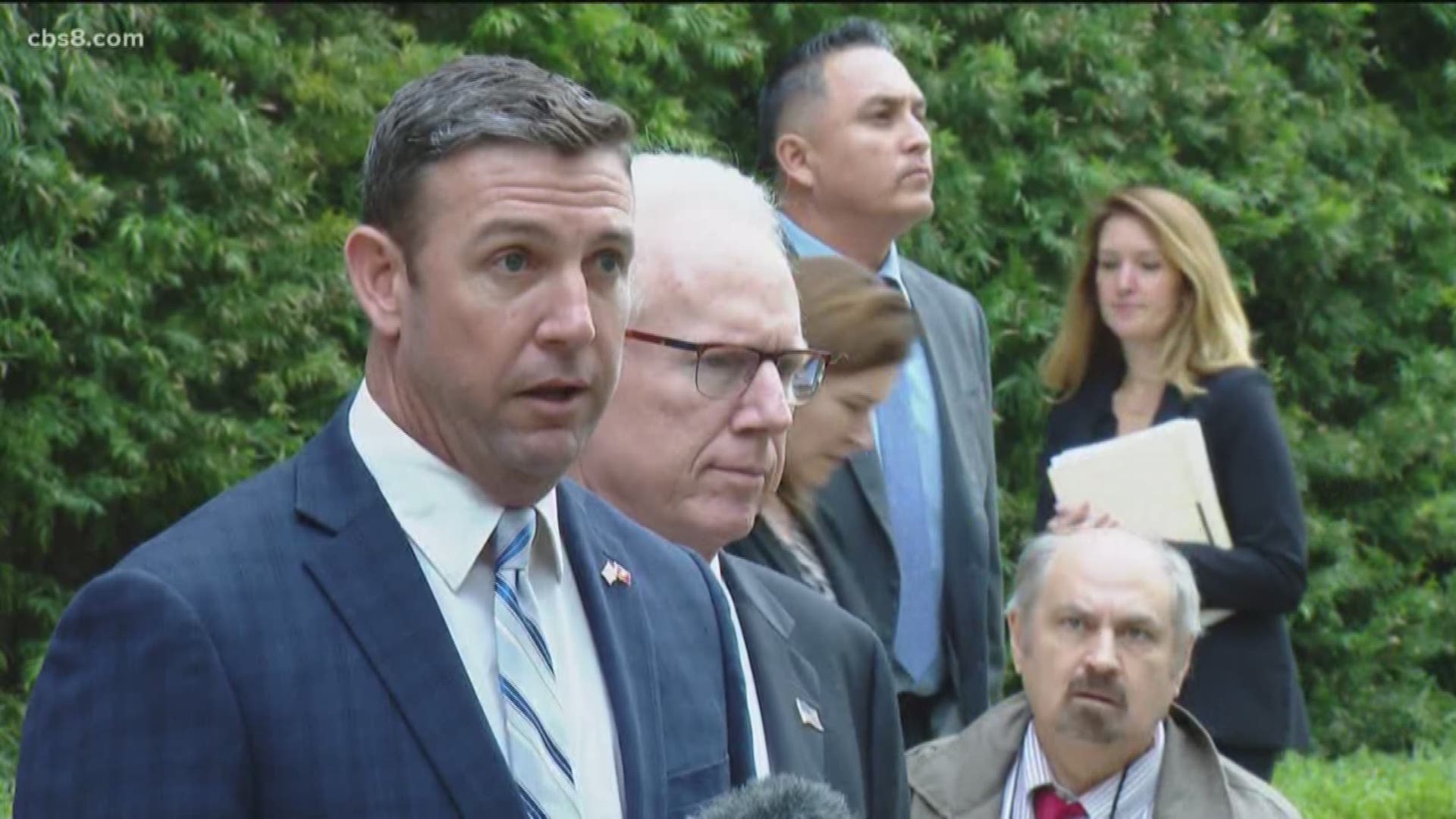 SAN DIEGO — The ongoing case of Congressman Duncan Hunter’s alleged misuse of campaign funds took an unexpected turn Monday when it was revealed that he would be changing his plea in federal court this week. What had been set to be a motions hearing became a a change of plea hearing which was held Tuesday morning.

Hunter has been involved in an ongoing campaign fraud case, in which he's accused of misusing $250,000 in campaign funds for personal use. Hunter was indicted along with his wife Margaret Hunter on 60 criminal counts, including wire fraud, conspiracy, and falsification of records.

Hunter, who is a combat Marine veteran, was first elected to office in 2008. Here’s a look at the timeline from his entry into public office to his guilty plea in San Diego federal court.

Duncan Hunter is elected to the U.S. House replacing his father in the 52nd District. Duncan L. Hunter served 14 terms in the district.

The San Diego Union-Tribune reports that the Federal Election Commission is looking into Hunter’s campaign spending on video games and tuition for his children’s private school. The congressman says he will pay back all charges in question.

The Hunters sell their Alpine home to repay loans acquired to pay back $49,000 to the congressman’s campaign. They move in with his parents, according to the San Diego Union-Tribune.

The House Ethics Committee announces it will continue an investigation into allegations of ethics violations against Duncan Hunter. The investigation comes after an inquiry launched by the independent Office of Congressional Ethics.

Hunter’s spokesman Joe Kasper claims it was a “simple oversight” when the congressman used campaign funds to pay for a $600 airline charge to bring a pet bunny on a trip with his family. When Hunter found out his campaign had paid for the rabbit's transport, he paid back the money as part of more than $60,000 in other questionable charges, Kasper said, all self-identified and self-reported.

The Ethics Committee suspends probe into Duncan's campaign spending at the request of the Justice Department which launches its own investigation. Duncan dismisses the allegations as “inadvertent mistakes.”

Hunter holds a town hall meeting in Ramona on March 11 drawing large crowds of supporters and opponents who lined the streets outside the venue.

Hundreds of protesters hold a rally in Escondido on March 25 calling for Hunter to resign.

The San Diego Union-Tribune reports on a subpoena that reveals a grand jury probe of Hunter in San Diego.

The FBI investigation into Hunter intensifies when Politico publishes new report laying out accusations of womanizing and drinking on the job in Washington D.C. Politico reports that federal agents asked former staffers about Hunter’s relationships with several women – including one that who worked in his office.

Duncan Hunter and his wife Margaret Hunter are indicted by federal grand jury on charges they misused more than $250,000 in campaign funds. They are accused of using the money to pay for personal expenses including family vacations, dental bills, theater tickets and international travel for relatives. They are also accused of filing false campaign finance records.

Credit: Sandy Huffaker/Getty Images
Rep. Duncan Hunter (R-CA) walks into the Federal Courthouse for an arraignment hearing on August 23, 2018 in San Diego, California. Hunter and his wife Margaret are accused of using more than $250,000 in campaign funds for personal use.

Federal prosecutors say they identified "scores of instances" between 2009 and 2016 in which the couple used campaign funds to pay for "personal expenses that they could not otherwise afford."

Hunter is re-elected while facing federal corruption charges. The congressman promises his constituents it will be “business-as-usual.”

Margaret Hunter pleads guilty to a conspiracy charge which carries up to a five-year sentence in federal custody and a fine of up to $250,000. The plea deal calls for her to testify against Duncan Hunter.

On Tuesday, Dec. 3, Hunter pleaded guilty before a federal judge to a federal charge of conspiracy to misuse campaign funds. Hunter faces a possible five-year prison sentence and a $250,000 fine when he is sentenced March 17, 2020.

Duncan Hunter was slated to go on trial starting Jan. 22 - just weeks before the March primary. As of December 2019, it was unclear how the change of plea will affect Hunter's bid for re-election in the November 2020 election.

Duncan Hunter is scheduled to be sentenced on March 17 after pleading guilty to a federal charge of conspiracy to misuse campaign funds.

Margaret Hunter is slated to be sentenced after pleading guilty to a conspiracy charge.