News 8 answers some of the common questions being asked as San Diego doctors and officials warn about health effects from contracting COVID-19. 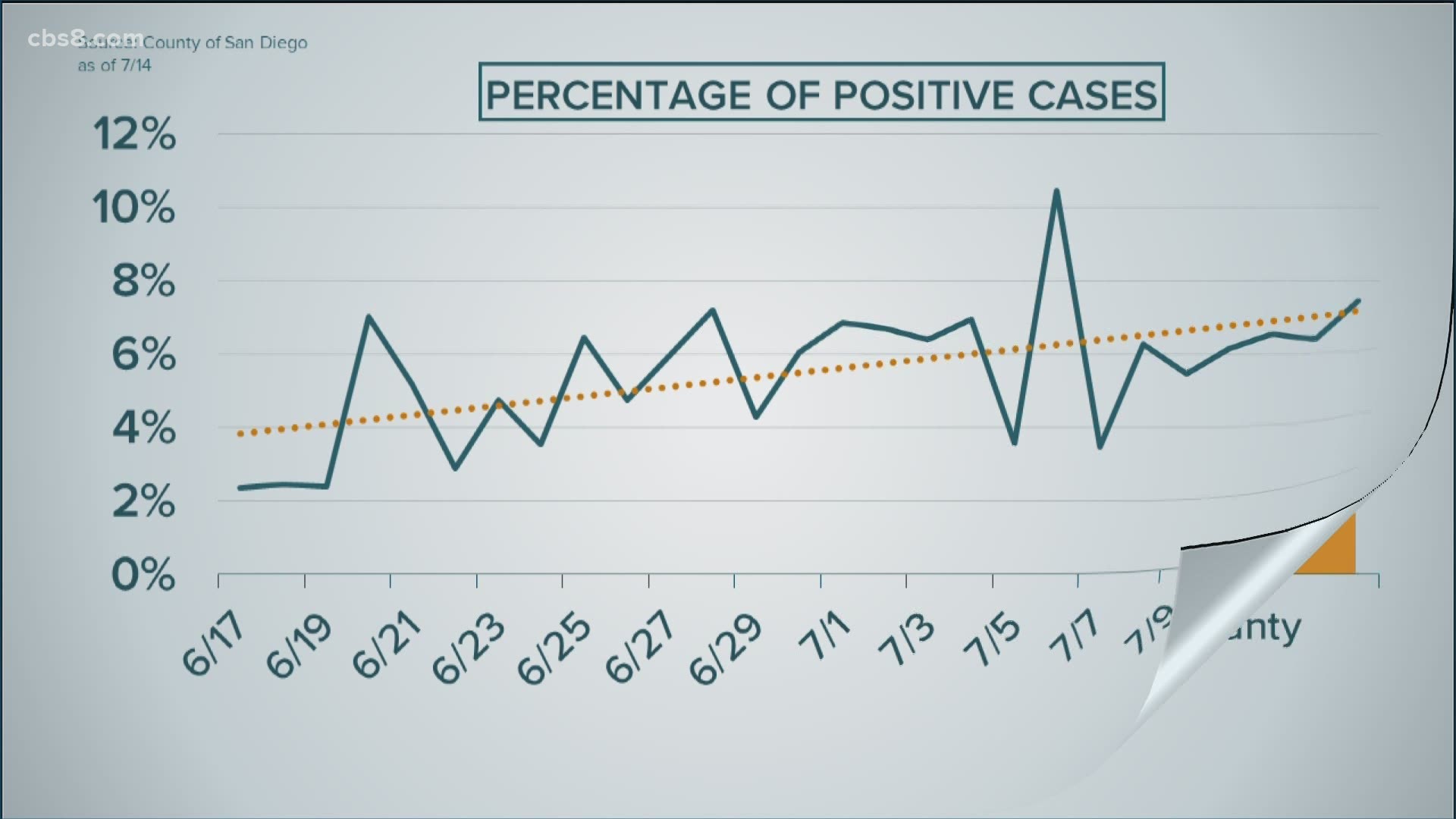 SAN DIEGO COUNTY, Calif. — San Diego County public health officials reported 559 cases of COVID-19 and 12 deaths from the illness Wednesday and a wave of indoor businesses were forced to close as cases of the illness continue to spike.

A community outbreak is defined as three or more COVID-19 cases in a setting and in people of different households.

The last metric the county has failed to maintain is the percentage of cases that have been handled by a contact investigator. Although there are more than 500 investigators currently employed by the county and 98% of all cases had been investigated as recently as June 25, that rate has dropped to a dismal 46%.

Dr. Wilma Wooten, the San Diego County's public health officer, said as a response to these flagging rates, the county is attempting to hire more contact investigators. In just a three hour period after the job posting went online, more than 300 applications came in.

The number of cases continues to rise in people between the ages of 20 and 49 and particularly in people in their 20s, prompting the county to make efforts at educating younger people.

More than 40% of all coronavirus cases have occurred within people between 20 and 40 years old. While they are most likely to survive the disease, doctors believe some may suffer lifelong health issues, especially to their lungs, heart and kidneys

"While it's true that the mortality for younger people is lower, it's also true that the rate is not zero," said Dr. Scott Eisman, pulmonary specialist at Scripps Memorial Hospital Encinitas. "The complications from this illness are far greater, much longer-lasting and far more serious than the flu."

“It’s much, much more profound and much more rapid than we typically see in influenza and let's remember at least we have therapies and an effective vaccine for influenza," he added. "We do not have that as much for COVID-19.”

Eisman said in studies following SARS and MERS outbreaks -- other coronaviruses -- people who had the disease and showed symptoms sometimes didn't regain original lung capacity until a year or longer after the symptoms began.

He described a 40-year-old patient who spent 45 days in the hospital, much of it on his stomach, to help oxygenate his blood. The man survived but is still working to regain much of his strength.

"All indications lead us to expect it to be at least as serious as those diseases and much more aggressive," he said, saying even otherwise healthy people could see months of complications from the illness.

"We know that COVID-19 affects the lungs differently than just the flu," said Dr. Eisman. "Not only does it affect the little air sacks in your lungs that we call alveoli but it affects the blood vessels in lungs as well. It causes blood clotting in general, not just in the lungs and that can create very substantial problems with the ability of the lung to deliver oxygen"

"Besides pulmonary disorders and breathing disorders, I think one of the really important things to understand about this illness is that it's not just limited to the lung," he said. "It causes neurologic disorder. We now know stroke is described in young patients as well as older with COVID-19. Difficulty in thinking, weakness. We know that there are effects on cardiac function -  in terms of heart failure and irregular heartbeating. We know that there are complications with the kidneys, blood system, liver, and those complications may be much longer lasting than people have recognized."

Additional industries, including gyms, churches, salons, indoor malls and non-essential offices were added to the closure list effective Wednesday as the rate increased to 147.2 per 100,000 residents.

The state has since rescinded the potential of reopening on July 27.

“It's not three weeks now. The assessment will be made, and the state will determine when businesses will reopen,” said Dr. Wooten said. “If people adhere to [hygiene, face-covering and distancing] strategies then we can get back faster.”

Cases increased by 19% between July 6 and July 13, which is less than the 24% increase observed a week earlier, which led to the county ending up on the state’s watch list. Cases continued rising faster in communities that reported a slower growth rate during the early days of the pandemic.

In Coronado, cases increased by 39% between July 6 and July 13. Poway reported a 36% increased during the same period. South Bay communities still have the highest total number of cases, but the rate of increase has decreased at or below the county average.

“Take those precautions to heart,” said Eisman. Although I know it’s tough to avoid being out among everybody, it’s much tougher to contract the potentially fatal illness.”

Where are coronavirus outbreaks in San Diego still occurring?

San Diego County confirmed 14 outbreaks between July 8 and July 14. Five were in a restaurant or bar setting. Three in a health care setting. And one in each a business, place of worship, residence, laboratory, hair salon and barbershop. An outbreak is defined as a setting having three or more cases from separate households.

How does smoking or vaping affect a person’s ability to recover from coronavirus?

“We know that smoking increases the chances that if you do contract COVID-19 and you develop pulmonary complications that those complications may be more severe. There is good evidence that that is also true for vaping. not to mention that we would have a hard time distinguishing what type of lung problem you have because vaping can cause its own lung disease we well and we've seen a number of cases of that,” said Eisman.

No, San Diego County includes only diagnostic tests in its positive case total. These are the tests traditionally performed at collection sites with a nasal or throat swab and determine if a person is positive or negative for COVID-19.

If a person is tested multiple times, would their results be reflected only once in the totals?

No, the test results are based on tests performed and their results. For example, if a person tests negative in May and positive in July then there would be two samples and two data points would be reflected.

Why might I have to wait several days or longer for a test?

There is a continued nationwide shortage of tests and testing tools. At the same time, more people are demanding tests.

The federal, state and local government is prioritizing who gets a test based on this criteria.

It sets four priority levels to determine how tests are distributed. Most people who are not displaying symptoms and do not work in essential jobs are placed in Priority Level 4, the lowest category, regardless if they believe they have been exposed. Even people who work in essential industries, but are asymptomatic, are only placed in Priority Level 3 under county criteria.

The Health and Human Services Agency strongly recommends asymptomatic people who think they may have been exposed to coronavirus or believe they have another pressing need for a test contact their healthcare provider, who may determine they warrant being placed in a higher priority level.

In most cases, Priority Level 4 individuals must make an appointment that can be several days, or weeks out. The county has some walk-up testing sites, but they often reach capacity early in the morning.

How accurate are the tests?

There are three primary coronavirus tests: molecular, antigen and antibody. Molecular and antigen are diagnostic tests that determine if a person actively has a coronavirus infection. An antibody test shows if a person has previously had coronavirus but cannot detect if they currently have COVID-19.

Click here to read more about the different types of tests and how they work.