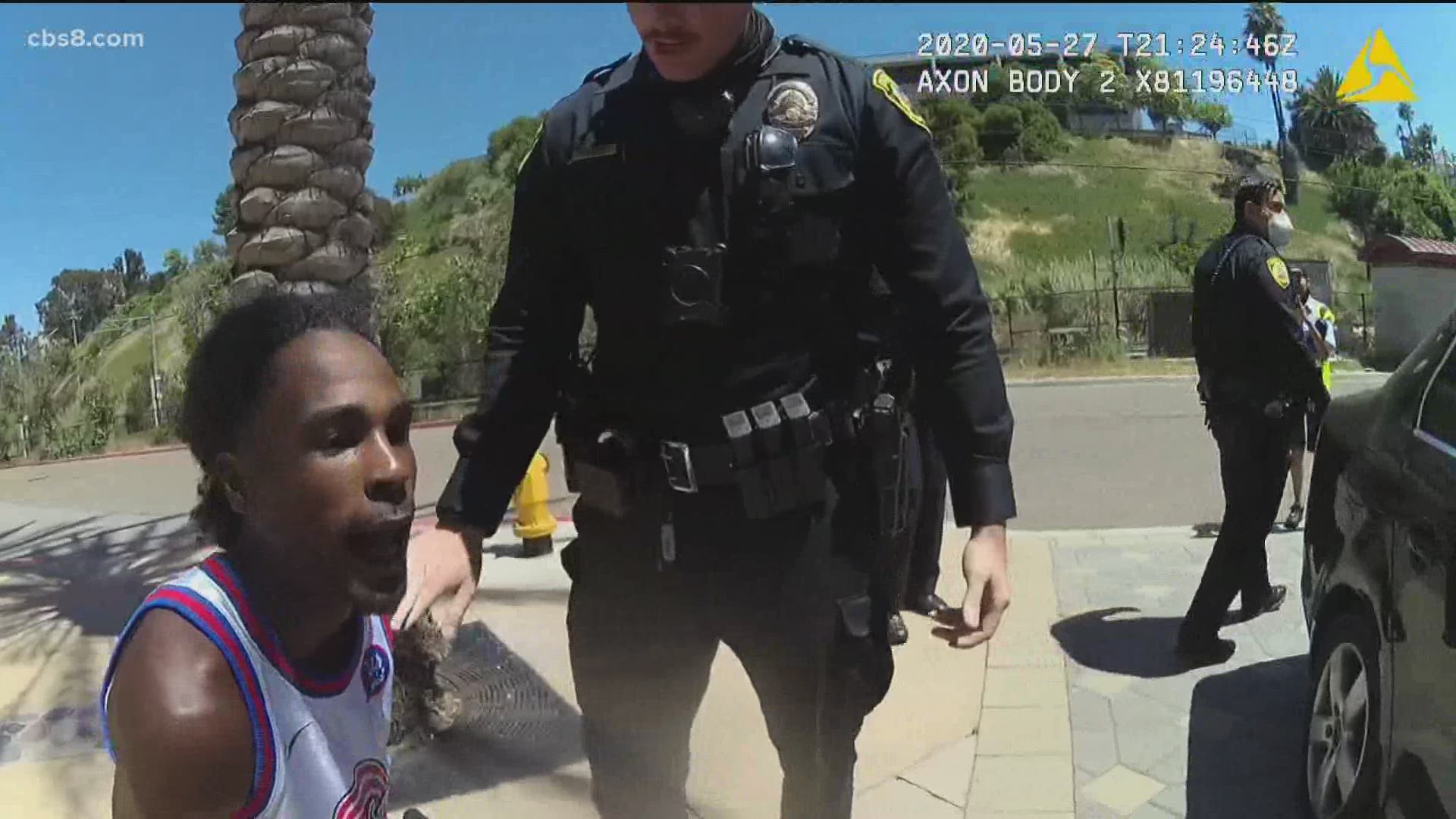 LA MESA, Calif. — La Mesa police on Wednesday released body camera footage of the arrest of a young black man last week near the Grossmont Trolley Center, though local activists said the city's response has been lacking and demanded the involved officer's firing.

The body camera footage -- which totals just over 10 minutes -- pertains to the May 27 arrest of 23-year-old Amaurie Johnson, who La Mesa Police Department Chief Walt Vasquez said was initially contacted for smoking in public, then later arrested on suspicion of assault on an officer, and resisting, delaying and obstructing an officer. He was released on a misdemeanor citation, Vasquez said.

Many have decried the incident as an example of racial profiling, which led police protests already planned following George Floyd's in-custody Memorial Day death in Minneapolis to take place in the East County city last weekend.

The circumstances surrounding Johnson's arrest remain under review, as well as the Saturday shooting of 59-year-old Leslie Furcron, who was struck in the forehead with a beanbag projectile during the weekend protest outside La Mesa City Hall.

Furcron remains hospitalized with severe injuries, including the potential loss of one of her eyes, according to her family and their attorney.

La Mesa city and police officials said Wednesday that investigations remain ongoing into both incidents by "an independent reviewer." The officer involved in Johnson's arrest has been placed on administrative leave pending the outcome of the investigation, while Vasquez said the officer involved in Furcron's case has been identified, but the department has not released his or her name.

City officials called an afternoon news conference to announce several items, including the release of the body camera footage and a ban on the carotid restraint technique, following similar, previous declarations by the San Diego Police Department and the San Diego County Sheriff's Department.

Those announcements did little to placate many in attendance, including Johnson and two of Furcron's sons, who have called for both officers' firings and criminal charges.

After city officials left the podium, Johnson and others held their own impromptu news conference, in which they challenged what they called a "sham press conference" organized by city officials.

"There was no accountability taken today amongst the police officers that were here, the police chief," Johnson said.

Johnson said there was no smoking paraphernalia found on him, despite that being the alleged impetus for his arrest. He said he was only waiting in the area for a friend to come pick him up.

Furcron's sons, Ahmad Furcron and Azim Sanders, questioned why the officer who shot their mother has not been identified.

The videos do contain expletive language.

There are SIX BODY CAMs from SIX OFFICERS:

The witness' version of the events are not seen on Dage's body cam video.

The independent witness in Goddard's video said she saw the events take place. According to her account, she did not see Johnson instigate anything.

“It hurts, it hurts. I watched it, I have the video. He was standing there. I seen him [Johnson] talking on the phone. He was asking where he is. He was waiting on them. The officer [Officer Dages] came from over there. He came over here. He asked him why is he [Johnson] standing here. [Johnson] said, 'I’m waiting on my friends.' He said, 'okay I’ll go wait over there.' He said no, 'sit down.' He started asking him questions. He said 'call him.'

"He was like, 'there they are, see. I’m about to leave.' As he was about to get in the car, the officer stopped him and said 'Where do you think you’re going? Sit down.'

He said, 'my ride’s right here. I’m about to leave. The officer was like 'no, I’m not done with you.' When he [Johnson] stood up he [the officer] got him by his neck and he brought him back down. That’s when you heard the screaming. Why did it have to go that far.

Body cam videos after the arrest:

WHAT THE FULL MEDIA CONFERENCE: