San Diego has 10 sealed gun violence restraining orders, Larry Millete's is just one of them

GVROs against Larry Millete and nine others remain redacted at the request of the San Diego City Attorney. 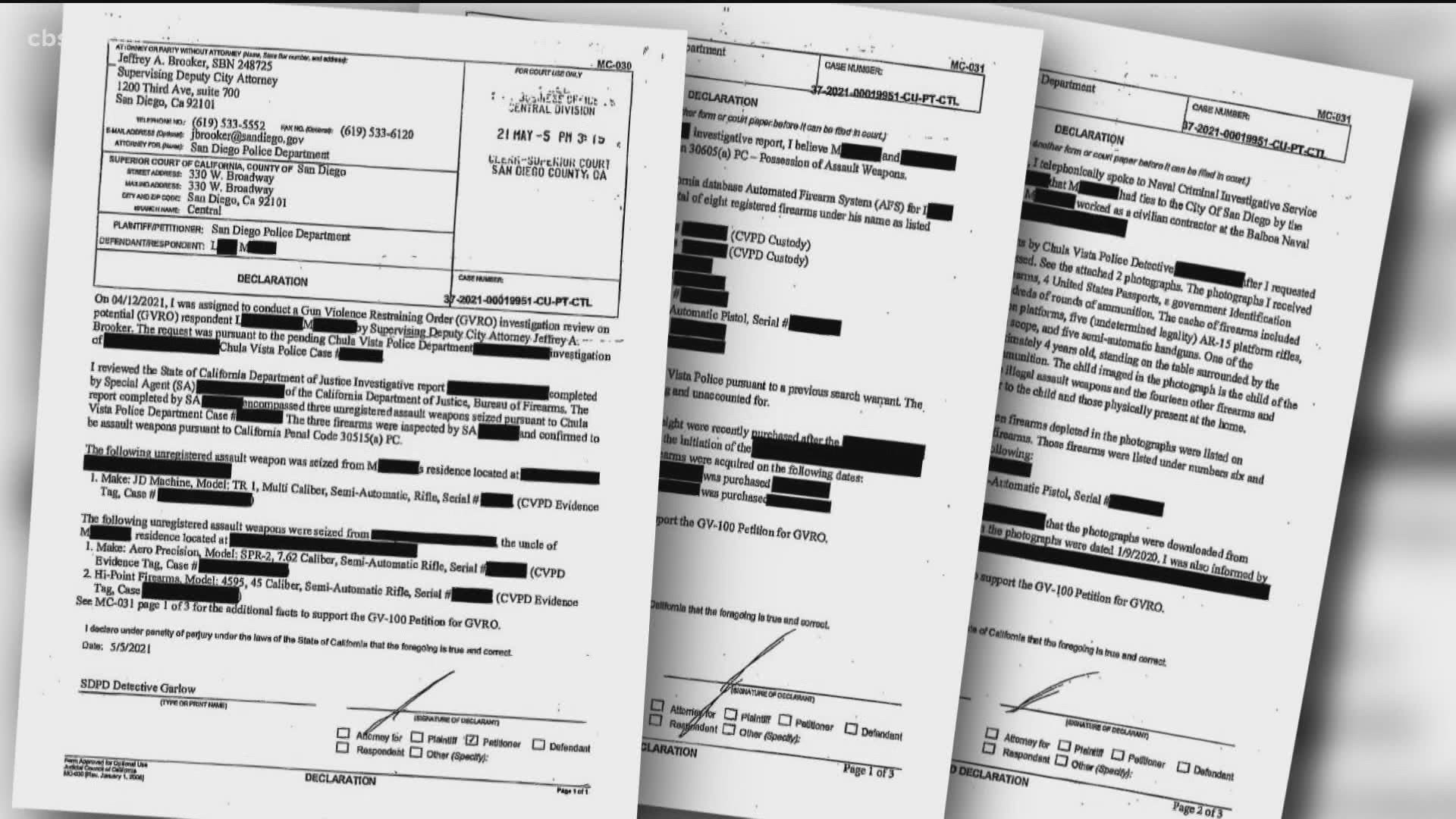 News 8 has filed a motion, asking the judge to unseal the GVRO records.

Police officers seized Larry Millete's entire gun collection on May 7, under the terms of a gun violence restraining order that had been redacted and sealed. The GVRO was filed under his initials only:  L.M.

It’s common practice for law enforcement to ask a judge to seal GVRO records before the gun owner has been served. Sealing the case in advance of service may prevent the target of the order from hiding his guns.

The sealing orders signed by the judge frequently contain boilerplate language, which dictates that the records “shall be sealed until Respondent’s first appearance or until a permanent hearing is conducted, whichever takes place first in time.”

The intent of that language is to make the records public once the gun owner knows his guns have been seized and can no longer hide his firearms.

Larry Millete’s first court appearance in the GVRO case occurred on June 22. News 8 contacted the court the next day, June 23, and requested the unredacted records be made public. Our request was denied.

The sealed and redacted GVRO records include two photographs, depicting Larry Millete’s cache of guns sitting on a kitchen table, and his 4-year-old son standing on the table near the guns, according to court records.

Other redacted records in the Millete GVRO case are expected to detail the justification officers had to enter his home in Chula Vista, and seize his weapons.

When News 8 discovered Larry Millete's court records remained redacted following his initial court appearance, a reporter started looking into other GVROs in San Diego County that had been sealed or redacted at the request of the San Diego City Attorney.

News 8 identified nine other cases where the names of the gun owner had been redacted, including one case involving a former San Diego County Deputy District Attorney.

The former prosecutor – identified only as “Matthew T” in the gun violence restraining order filed against him – was accused of threatening a political campaign worker on the street in February 2020.

The GVRO eventually was dismissed against the prosecutor but misdemeanor charges were filed. The criminal case records revealed his full name, Matthew Tag.

Tag and his wife -- who was also a San Diego deputy district attorney -- have since moved out of state, and Tag no longer works for the San Diego County District Attorney’s office, according to court records.

A hearing in the misdemeanor criminal case against Tag is set for July 22 at 1:30 p.m. in Department 202 downtown.

"The vast majority of times our Office petitions to have a GVRO sealed, it is (a) to protect the privacy of a juvenile respondent or (b) to prevent a respondent from learning of the GVRO before they are contacted by the police officers tasked with confiscating firearms. The latter is a safety measure designed to protect lives.  By the court’s own order, seals expire once the respondent is served or after the first hearing at which a respondent appears. This language is part of every sealed GVRO sought by our Office.  At that point, anyone should be able to get an unsealed copy of a GVRO without petitioning the court.  Millete is an extremely unusual case about which we cannot comment further at this time."