Families who lost their homes were figuring out how to proceed as three NTSB investigators spent hours Tuesday documenting the scene of the crash. 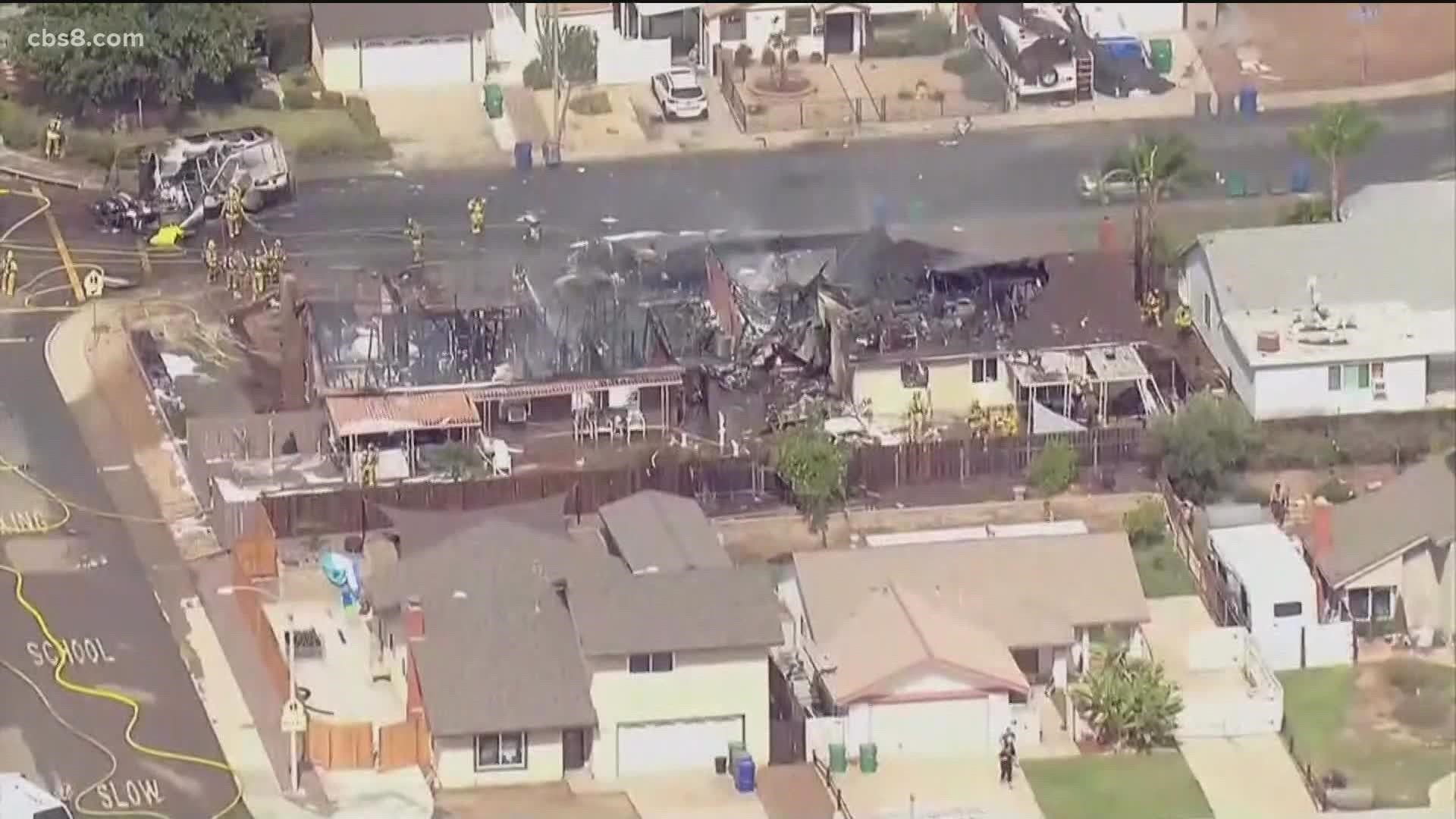 SANTEE, Calif. — The community affected by Monday's deadly plane crash in Santee will next deal with the daunting task of trying to re-build. Meanwhile, the investigation into what caused a Cessna twin-engine plane to plummet from the sky into a fiery explosion in the East County San Diego neighborhood is underway.

"It looked like a war zone when I got here yesterday," said Santee resident Paul Addington. "It was bad. Nothing I had ever seen in my life."

He grew up on Greencastle Street where his mom still lives. He raced there Monday as soon as he got news of the plane crash.

"Me and my brother rushed here," Addington said. "And when we got here, it was across the street."

Just a couple of houses away was a scene of utter destruction as two homes were destroyed. While his childhood home had some debris damage, he said the damage to his community is worse.

"It is devastating," Addington said. "It is sad."

He said the rebuilding will take the power of the community.

"I think the community is just going to come together and help each other out," Addington said. "And it's not just Santee, it's the surrounding communities that are feeling it."

Rebuilding will be even more difficult for those families who lost everything - including Phil and Maria Morris who were rescued from their home by neighbors and as of Tuesday were in the hospital recovering from the burns they suffered.

"It will be nice to see them come home as soon as possible," Addington said.

But reconstructing that home will take time.

"It is very overwhelming," said James Slaff-Gruel - the couple's son.

Slaff-Gruel said he has begun working with the insurance company but is more concerned about his parents' emotional state.

"You don't know how somebody is going to react to all this," he said. "Once the shock wears off and they see their house like this."

And right next door to the Morrises, newlyweds Courtney and Cody Campbell also lost their new home. They are now focused on finding another one for the time being as they try to figure out their next steps.

"It's going to be 12 to 18 months before we get anything permanent - either rebuild or find another home - whatever that looks like," Courtney said.

For neighbor Lidor Hemo who captured some of the first images of the devastating aftermath of Monday's crash, the physical rebuilding of this community is not as significant as the need to rebuild a sense of security.

"Everything is just wood and drywall. I am thinking more about the safety of all our neighbors here," Hemo said. "That is more important - that they feel safe again."

The National Transportation Safety Board was also at the scene of the crash Tuesday. Three investigators arrived to begin the process of documenting the scene, according to the agency.

The NTSB issued a statement on the investigation to News 8 the read in part:

The flight operated on an Instrument Flight Rules (IFR) flight plan from Yuma International Airport in Yuma, Arizona to Montgomery-Gibbs Executive Airport in San Diego, California. The aircraft did not have a recorder on board. Wreckage recovery will begin today.

The preliminary report, which includes all the factual information learned to date, is expected to publish 15 days after the accident.

At this early stage of an investigation, NTSB does not state a cause but will provide factual information when available. Investigations involving fatalities, and other major investigations currently take between 12 and 24 months to complete."

An entry on an FAA safety log noted that there were two fatalities and two serious injuries as a result of the crash. It did not indicate that there were any passengers in the plane that crashed.

The pilot who died in the crash was identified as cardiologist Dr. Sugata Das and the man killed on the ground has been identified as UPS driver Steve Krueger.