Organizers say the new bike lanes aren't worth the loss in parking. 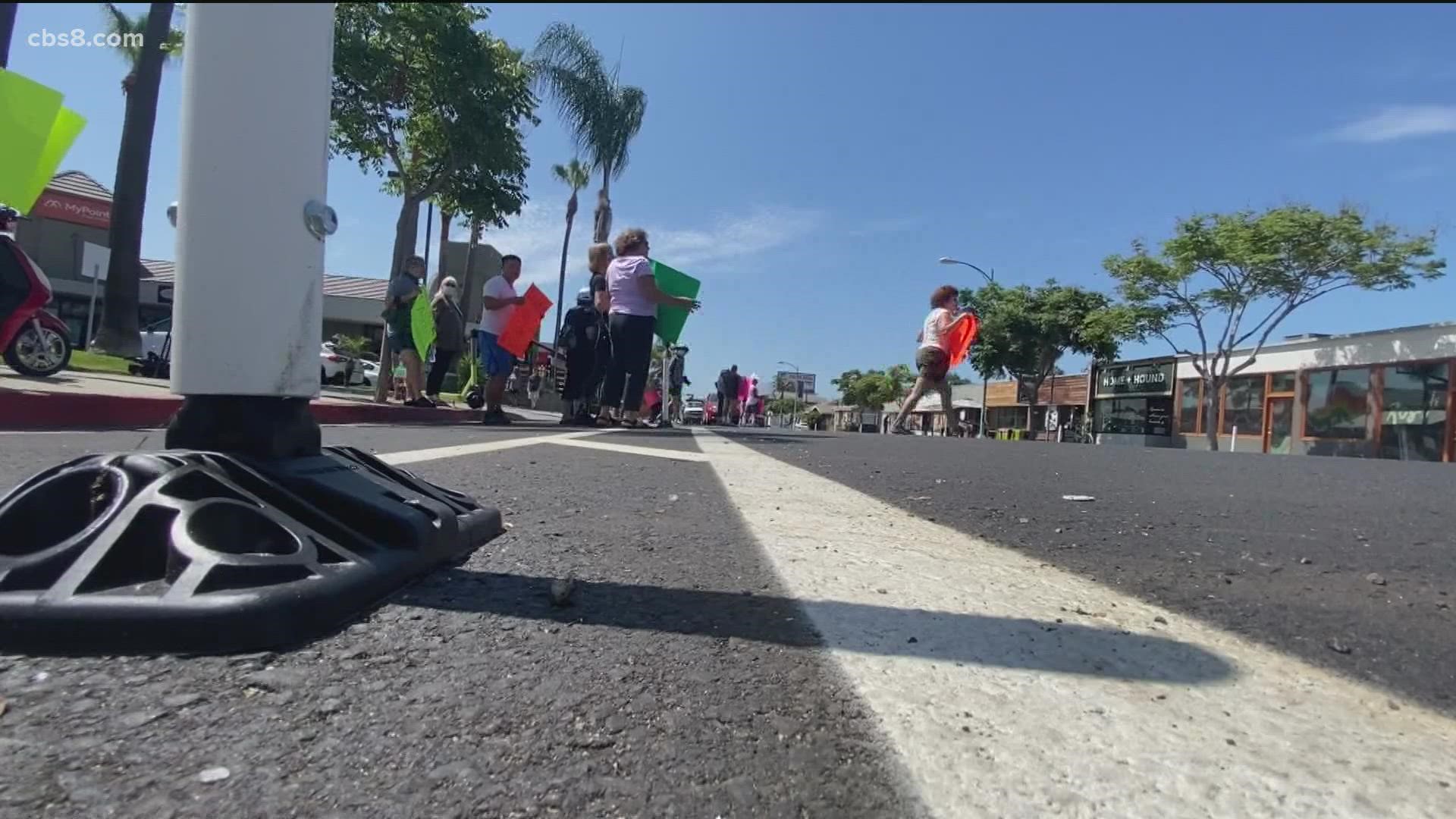 SAN DIEGO — Street parking is out and bike lanes are in on 30th Street in North Park. But some folks say, not so fast. Organizers with "Save 30th Street Parking" had a rally Friday morning to raise awareness and demonstrate what they say is a severe lack of parking in the area. They say an already tough parking situation has been made that much worse by new bike lanes. That’s why they're taking their case to court. Supporters of the bike lanes say they bring more amenities to the growing area of the city and save cyclists lives.

CBS 8 cameras were there when things got a little tense along 30th Street at the “Save 30th Street Parking” rally when bicyclists in bike lanes and bike lane protestors interacted. A handful of protestors said the bike lanes aren’t worth losing more than 400 parking spaces.

Pat Sexton with “Save 30th Street Parking” said she didn’t support any aggressive interactions between the two sides but maintains the bike lanes must go. Khalisa Bowlling was biking along 30th Street when an anti-bike lane protestor attempted to stop a CBS 8 photographer from talking to her about the debate. Khalisa attributes the tension to growing pains, "As we're growing, we're getting more housing in the area. We're going to have to make some transportation changes and people don't like change.

But Khalisa maintains having the bike lanes are the safest way for bicyclists to travel.

"Most days I'm riding with my 4-year-old son in the back and I wouldn't normally be riding on 30th. And now that they put these in, I feel more comfortable riding with him," she said.

There were about 30 anti-bike lanes protestors at the height of the rally. Gene Polley, owner of Redwood Terrace Apartments on 30th Street said because of the newly installed bike lanes, delivery trucks now also use his on-site parking and this negatively impacts the parking situation for his tenants.

"All of the on-street parking was full. And that was before they eliminated the 400 plus parking spaces. This is idiocy," he said.

He’s also upset with the lack of communication and coordination from the city about the new bike lanes to residents and business owners.

To make up for the loss in parking, North Park now has a parking garage with more than 200 spots that Mayor Todd Gloria said is underutilized. Pat Sexton said, the parking garage isn’t feasible for most of North Park residents.

"As of yesterday the elevator was broken so unless you're only parking on level one, you're out of luck. I assume that's going to be fixed. There's also no security in there whatsoever now," Sexton said.

Upon inspection, CBS 8 can confirm as of noon Friday, July 30th, one of the parking garage elevators was indeed out of order. There was even caution tape on the door on the first floor. However, there is a second elevator that was found to be fully functional on the other side of the parking garage.

Jesse O’Sullivan with Circulate San Diego, a mobility focused – pro bike lanes – non-profit said that the 30th Street Parking Garage has some of the cheapest parking rates in San Diego and it’s one of the biggest compromises to have both bike lanes and available parking along 30th Street.

"There’s parking protected bike lanes, so there's still parking along the street. There have been accommodations for the disabled by putting in more disabled parking next to 30th," O'Sullivan said.

Sexton, meanwhile, said there’s not much room for compromise on the bike lanes versus parking debate on 30th and succinctly said about the lanes: "You need to take this out and put it some place else."

Jesse maintains the bike lanes are a life-saving amenity.

"It's a choice between saving lives and convenient parking and I think it should be clear to people that saving lives is a more important priority. 12 bicyclists have died in the last year. Five of those were in the last month and it's projects like this that save lives," Jessie said.

Pat offers, "I don't think a (bike lane protector) post is going to keep anybody from getting hit in the bike lane."

Sexton said despite their desire to get rid of bike lanes, she wants everyone that uses 30th Street - no matter your mode of transportation - to stay safe and get where they're going alive. She said the two sides simply disagree with how to accomplish that goal.

“Save 30th Street Parking” will take their case before a judge Aug. 11. Their goal is to strip 30th Street of the new bike lanes.

Circulate San Diego will have a bicyclist rally called “Thriving on 30th” Sunday, Aug. 1st at 10 a.m. to celebrate the new bike lanes on 30th Street.