For part 2 of this throwback series, we have even more culinary treats - and reveal who was the longest-running Unknown Eater! 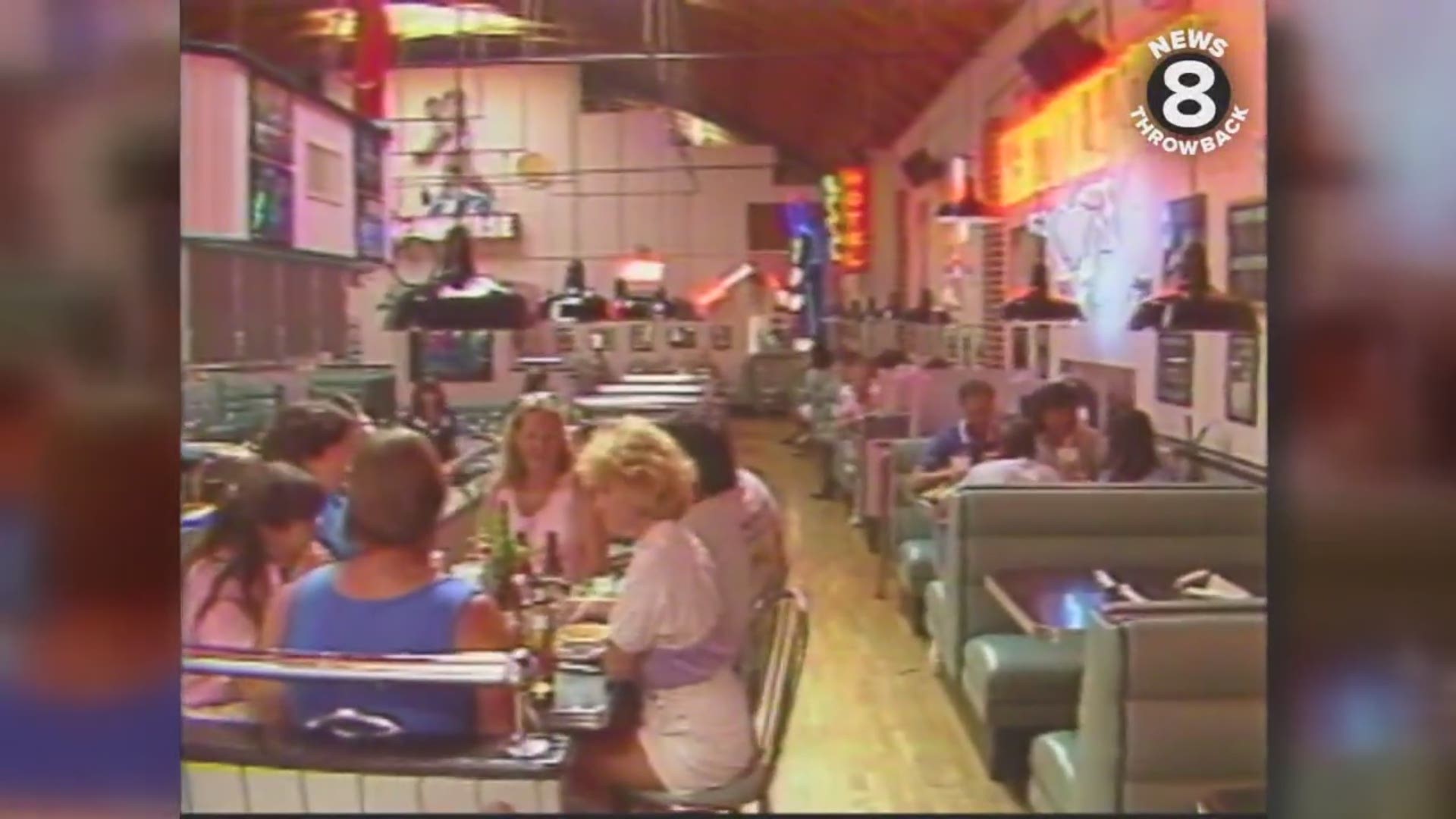 For many years, starting in the late 1970s, News 8 presented restaurant reviews from The Unknown Eater. The mystery diner would anonymously visit an eatery and for opinions about its ambiance, food and prices before the segments were shot by News 8 cameras.

If our discrete diner liked a place it got an Unknown Eater placard to hang on the wall – some can still be spotted throughout San Diego today!

In part one of this Unknown Eater series, we shared a few restaurants that were deemed worthy of our secret foodie’s palate and for part two we have even more culinary treats - and reveal who the longest-running Unknown Eater was!

When San Diego re-open we hope – like us – you'll visit the eateries reviewed here that are still around today!

In the summer of 1988, News 8's The Unknown Eater stopped in for the nostalgic atmosphere and menu of San Diego's Corvette Diner. With the walls adorned with neon lights and pictures of everyone from Elvis to James Dean to Buddy Holly, a trip to this diner was and is like a trip back in time to the 1950s. Our anonymous eater was pleased with what he sampled back then including burgers, meatloaf, chicken fried steak, mashed potatoes - which he raved about - and, of course, quintessential diner milkshakes. The restaurant, which opened in 1986, has also always boasted a sassy waitstaff dressed in ‘50s garb and fun names for various menu items. More than just a meal, our Unknown Eater called a trip to Corvette Diner an experience.

Previously located in Hillcrest, now in Liberty Station, Corvette Diner is closed as of April 2020 due to the coronavirus pandemic. We can’t wait for them to reopen so we can get our hands on those milkshakes!

In 1997, Joe and Lisa Busalacchi owned three of the most acclaimed restaurants in San Diego. So why not open another? Joe wanted to serve up more seafood dishes so Vicino Mare - which means "close to the sea" - was born. The name was also fitting as Joe started his culinary career as a chef on a tuna boat. Lisa said she was a glutton for punishment and son PJ said he wanted to name it Lisa and Joe's Final Restaurant. Lucky for San Diego, PJ's wish was not granted. The Busalacchi family still has their hands full as of 2020 with three popular eateries in Little Italy: Barbusa, Nonna and Cafe Zucchero.

The Busalacchi restaurants are closed as of April 2020 but when they re-open that Italian fare will certainly be calling our name.

In the heart of Ocean Beach on Newport Avenue is a restaurant that claims to make the world's best burger. While there is no proof that it does, an argument can certainly be made and many San Diego diners would agree. Hodad's has been in Ocean Beach since 1969 and in its current location since 1991. Mike "Bossman" Hardin took ownership from his parents in the 1980s. Mike told the Unknown Eater in this piece from 1994 that there was nothing trendy about it - just a good old-fashioned hamburger. Sadly, Mike passed away in 2015. As of 2020, Hodad's remains an Ocean Beach institution and also has a location in Downtown San Diego with concession stands at Petco Park and Sycuan Casino.

Hodad’s is temporarily closed as of April 2020 due to the coronavirus pandemic. When they are able to re-open, we will be lining up for a big bite of those tall juicy burgers!

In the summer of 1995, News 8's The Unknown Eater made a stop at a restaurant patrons lovingly called "eccentric" and "different." Even Chef Deborah Scott admitted the dishes could be "weird" but said that's why people wanted to dine there. She presented artistically crafted meals that were almost too pretty to eat... almost. The Indigo Grill used complex ingredients and fused styles like Mexican and Southwest cuisine influenced by Native American elements. Chef Deborah enjoyed combining flavors in different ways at the popular eatery: "the stranger the better" she said.

Sadly, Indigo Grill closed for good in February 2020 after more than two decades in business. But Chef Deborah Scott remains a fixture of the San Diego food scene and partner of the Cohn Restaurant Group. When they are able to re-open you will likely find her at Coasterra, Vintana or Island Prime/C Level.

And now for the grand finale...

The Unknown Eater was Yelp before it existed. So just who was that restaurant critic whose face we never saw but voice we all knew? From 1986 to 2001, he went to all the hot spots and hole-in-the-wall restaurants around town incognito. He was a photographer so he would go back with his camera to shoot the restaurants he dined at. We're not sure why they didn't recognize his voice but he got away with it from 1986-2001. He is: Jim Blankinship! Below you'll find some of what Jim had to say about his time as The Unknown Eater

"Back in 1986, there was a new reporter on News 8 - a restaurant critic who shared his opinion on great eats, but who never showed his face.

And I am that former food critic. I’m The Unknown Eater.

For 15 years, I did stories on over a thousand restaurants in San Diego - from fast food to gourmet cuisine. Always opinionated and always unknown.

The Unknown idea came from legendary News 8 news director Jim Holtzman. He decided that I’d never show my face so that I could dine at a restaurant without a camera crew, and without warning so that I could get the same food and service any other customer would get. Later, the story would be shot and edited but the opinions always came from my unknown visit.

Probably my favorite review was at Fio’s Italian in the Gaslamp Quarter. After eating there, they refused to let us film inside their restaurant so I got the food to go,  placed it on a newsstand across the street from the restaurant, and had news anchor Lorraine Kimel try out the food - and Lorraine loved the food as much as I did. In the end, Fio's had a change of heart.

I got to experience cuisine from the finest chefs in town from Deborah Scott at Indigo Grill to Joe Busalacchi and his incredible seafood pasta dish. Both so good they ended up being the best restaurant of the year.

But to her honest with you, my favorite restaurants were not the expensive gourmet elaborate meals. I just love a good hole-in-the-wall.

Leah's Filipino food was amazing. And Se Se chang owner of the Dragon Wok made kung pao chicken that was the best in the known universe.

The Unknown Eater went international with a review of the street food of Bangkok Thailand. I tried the meals served on a 100-year-old boat on the Amazon river. Sampled the local cuisine served on a sailboat in the Caribbean. And sampled halibut fish and chips in Sitka, Alaska. It was a fascinating calorie-filled dining extravaganza that lasted 15 years and it always ended with the same sign off: "for News 8, I'm the Unknown Eater."

Credit: KFMB
This placard would hang in restaurants deemed worthy of our mystery eater. Some Unknown Eater Approved signs can be seen around San Diego today!

Here are some more Unknown Eater memories from others who wore the mantle (these entries have been edited for clarity):

"I clearly recall the genesis of The Eater. Several people from the station, including GM Bob Myers, owner Chris Meyer, people from programming, Tim Hnedak from promotion, and I, went to San Francisco for a weekend to watch a presentation for PM Magazine with the thought Channel 8 might make a deal to run it at 7 p.m. On the presentation tape, there was a segment about restaurants, not really reviews but more profiles. Watching it, I remembered reading someplace that more people in San Diego ate out per capita than anywhere else in the country. I read that while I was working at KGTV and persuaded Jack White to start a feature called Restaurant Row.

[For] Jack's reviews he'd call a place, tell them when he and the camera crew were going to arrive, show up and then marvel at the wonderful service he received. Anyway, watching the PM Magazine "audition" tape, I kinda wondered out loud, "Wouldn't it be fun to do restaurant reviews in San Diego, but do them anonymously without a camera?" I seem to remember Chris Meyer expressing enthusiasm for the idea and asking, "What would you call it?" Somehow, automatically, I said "The Unknown Eater."

When we got back to SD, I pitched it to Erik [Sorenson] because he was bright, brash and a good writer and we had to have someone who no one recognized. Erik did it till he moved on to a much bigger and better opportunity and then I took over. It was fun for a while. I'd eat meals alone, I'd eat meals with my wife, I'd eat meals with my boys. And not only did the station pay for it all, but I got an on-air talent fee because I had to be a member of AFTRA. It was great. We did the Unknown Eater's favorite breakfast places and lunches and what have you.

Unfortunately, there were those weeks when I got really busy with news stuff and it was already Wednesday and I realized, "I gotta eat out for this week's Eater!”

History lesson: I lasted till the day Ronald Reagan was shot. I happened to be in Chicago (job interview) on the day of the shooting and got a call from assignment editor Bob Sioss. He told me I was just a short a plane ride from DC and that he had booked me a flight. I got to DC, took a taxi to a hotel and ended up talking live for about three or four minutes to Marty Levin on the 11 p.m. news about "the mood" in Washington. After that, people called the station and said they heard “The Eater” talking about the Reagan shooting. No more restaurant reviews for me.

Other producers and assignment editors took over, but the Eater never really became THE UNKNOWN EATER till Jim Blankinship. He was perfect and did it really well for a long, long time. I was eternally grateful for that kind of a legacy."

"Jim Holtzman was our brilliant, disruptive (before that was even a word) News Director and I went to him in 1978 to volunteer to 'do anything' beyond my eight-hour daily producer schedule.  He said he had this kinda crazy idea to do anonymous restaurant reviews - anonymous so that the restaurant couldn’t pour on the special service in an attempt to please the critic.  (By the way, this was years before Ruth Reichl - a vastly superior critic! - went undercover for the LA Times and then The NY Times.) It would require going to restaurants (at the station’s expense!) at night - on my time off - but think of the free food offer to a hungry 22-year-old. It would require that, plus some real cleverness, to pull it off.

Well, looking back at the pieces in the News 8 Throwback, cleverness is in short supply so I’m so grateful that Jim looked the other way and allowed me that opportunity.  By the way, besides cleverness I believe I was also quite short of taste.  And knowledge.  Many of the food types I was trying for the first time. So, during my 18-24 months as The Unknown Eater (Jim’s idea for a name too) I fell back on descriptions of atmosphere, decor and service, along with good photographers which were bountiful at KFMB in those days!"