Evidence taken by police includes the assault rifle used in the shooting and a hunting certificate. 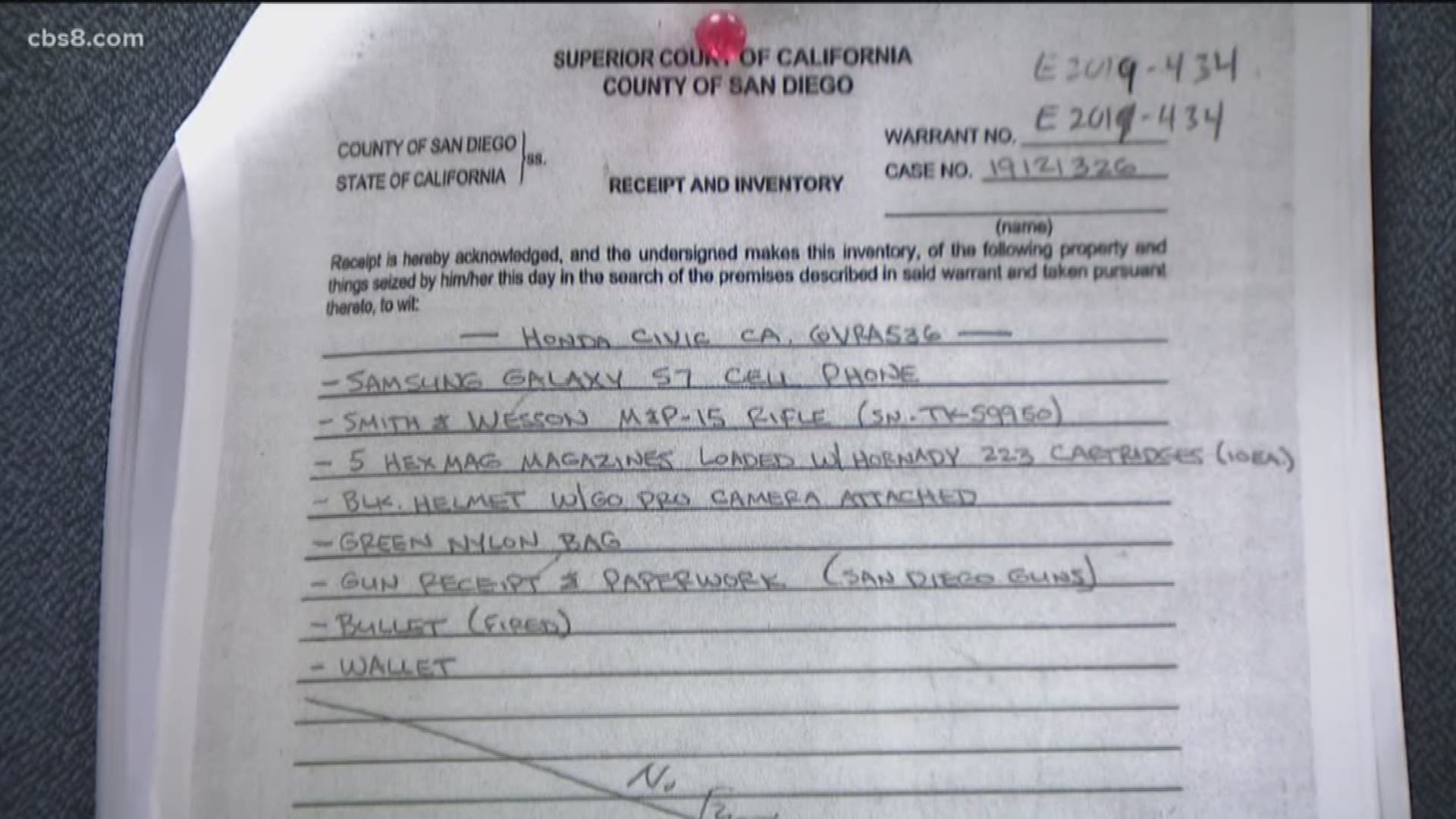 Search warrants associated with the Poway Synagogue shooting were released Wednesday by a San Diego Superior Court judge. A total of 17 warrants were served in the hours and days following the April 27 shooting which claimed the life of one congregant and injured several others.

The warrants were served on the Chabad of Poway as well as the alleged gunman’s home, school, social media accounts, and the Honda Civic belonging to the accused shooter. PDFs of all warrants can be seen below.

The release comes after presiding Judge Peter C. Deddeh ruled last week there was no legal cause to keep records sealed in relation to the investigation into John T. Earnest, the 20-year-old who allegedly committed the April 27 shooting rampage at Chabad of Poway and the March 24 arson blaze at the Dar-ul-Arqam Mosque, also known as the Islamic Center of Escondido.

The defendant, who's being held without bail, is accused of carrying out the shooting on the last day of Passover, killing Lori Gilbert Kaye, 60, who was shot twice in the synagogue's foyer and died at a hospital.

The warrants include lists of evidence seized, including a gun receipt from a store called San Diego Guns on Mission Gorge Road in the Grantville area. The store owner did not want to speak to News 8 on camera but confirmed one of his employees sold Earnest the gun.

The receipt listed the price paid at San Diego Guns as $963.41, according to the warrants.

Other evidence taken by police includes the assault rifle used in the shooting and a hunting certificate. Under California Law, a person under the age of 21 can legally purchase a rifle if they have a valid hunting license.

The most recent search warrant affidavit from May 17 corrects earlier versions that incorrectly stated Earnest had used both a rifle and a handgun in the attack.

“The investigation later revealed that Earnest only fired rifle rounds,” according the May 17 affidavit filed by an investigator with the office of the San Diego County District Attorney.

Following the shooting, SDPD officers discovered a post on Earnest’s Facebook page that “purportedly contains a livestream link referencing the shooting,” according to the May 17 warrant.

There is no indication in the search warrants that livestream video depicting the attack was seized by officers.

The multiple warrants were used to seize Facebook photos, private messages and deleted posts. There were also warrants for information from Google, Inc. and AT&T Wireless records as well as school records from Mount Carmel High School and Cal State San Marcos which Earnest attended.

Records show detectives found a manifesto on PasteBin.com written by Earnest called an "open letter" where many anti-Semitic and anti-Muslim statements were made.

Records also include information on Earnest taking credit for the Escondido mosque fire a few weeks prior to the synagogue shooting. He wrote in response to the New Zealand mosque shootings in March: "I scorched a mosque in Escondido with gasoline after Brenton Tarrant's sacrifice."

The alleged gunman is being prosecuted in federal and state court in separate but simultaneous cases, but the collective media organizations noted in their motion filed last month that federal authorities had unsealed two search warrants related to the investigation, while state courts had not.

The motion noted the 20-year-old's alleged racially motivated intentions for committing the shooting as a key basis for the request.

Warrant served for alleged gunman's home and car, and Chabad of Poway:

Warrant served for surveillance footage from Chabad of Poway synagogue:

Warrants served on cellphones and cameras belonging to alleged gunman: