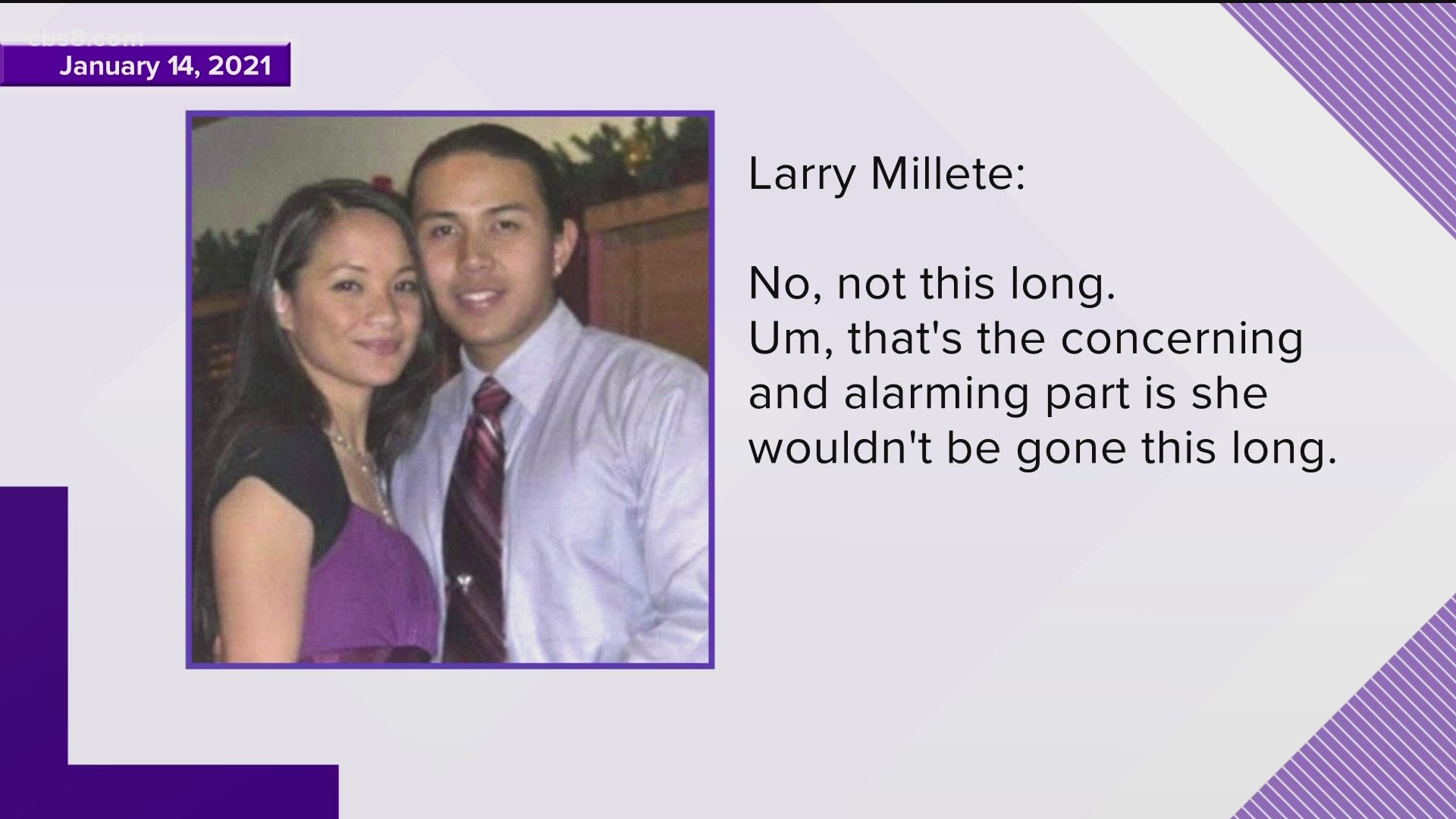 SAN DIEGO — On the evening of January 14, 2021, family and friends of Maya Millete gathered for a vigil at Mount San Miguel Park, near the home of the missing Chula Vista mother.

Millete, 39, had been missing exactly one week.  The community showed up to offer support.  The missing woman’s sister and brother-in-law, Maricris and Richard Drouaillet, also attended the candlelight event.

Larry Millete was a no-show.  He dropped off his oldest daughter.

CBS News 8 reporter Abbie Alford was covering the vigil for the 10 p.m. and 11 p.m. newscasts.  She wanted to interview the husband, who was nowhere to be found.

So, Alford called Larry Millete on his cell phone.  It took some convincing.  He almost did not talk.  Finally, he agreed to a brief interview.

Alford recorded it on her cell phone in the back of her car in the parking lot near the vigil.

“What do you love about Maya?” Alford asked the husband.

“Oh, I love everything about her. She's very smart, kind.  Basically, just her, herself, her personality. Just everything,” Larry Millete responded.

“How are your kids taking this?” asked Alford.

“That’s my main focus.  That's why I am very thankful for my sister-in-law, Maricris, because she's handling all this media attention.  She’s actually doing everything that I should be doing, you know, out there.  But at the same time, I'm just making sure, you know, it's as normal, like a normal day for them,” said the husband.

“I try to minimize the impact that it has on them but, although even though I'm trying to that, I notice they know what's going on,” said Millete during Alford’s eight-minute conversation.

The veteran reporter had heard Millete did not attend the vigil for privacy reasons, but she wanted to confirm that info.

“You just didn’t come, what, for privacy reasons?” asked Alford.

On deadline for the evening news, Alford picked out the best sound bites and aired her two reports from the vigil at the park.   She included an in-person interview with Maya’s sister, Maricris.

Her raw interview with Larry Millete stayed on her cell phone as an mp3 file for the next three months.

Maya Millete remains missing but a lot has changed since her husband spoke to Alford on January 14.

Evidence in the investigation has been leaked, including surveillance audio of six loud bangs, that sound like gunshots, heard in the neighborhood at 10 p.m. on Thursday, January 7.

Larry Millete has hired an attorney, according to Chula Vista Police, and stopped cooperating with the investigation.

Search warrants have been issued, including at least one served on Millete’s house on Paseo Los Gatos in Chula Vista.

On April 12, Maya’s sister and brother-in-law appeared on "Dr. Phil."  The national exposure resulted in more details coming out about the case.

Maricris Drouaillet confirmed Larry is no longer giving her side of the family access to Maya’s three children.

After Dr. Phil aired a portion of Alford’s original report from January 14, a News 8 reporter asked if she still had the raw interview on her phone.

The entire interview is now posted on YouTube. All the questions and answers, out there.

“What about the public that don’t even know you, that thinks that you did it?” asked Alford back in January.

“That’s the thing about the media part, you know, it's upsetting sometimes that, you know, people make implications.  You know, like domestic violence.  I’m like, really?  Her brothers are here, her three brothers, and they know our relationship.  I've always been open to the family about our relationship and they know I've never touched their sister,” responded Larry Millete.

Millete told Alford the media sometimes gets it wrong.

“We get it.  I mean, you know, whatever makes the biggest impact.  And I'm thankful for that because whatever promotes helping find my wife, Maya, whatever it takes,” Larry Millete told Alford.

Investigators have not publicly named any persons of interest or suspects in the case.  If you have any information on the Maya Millete missing person case, contact Chula Vista Police.