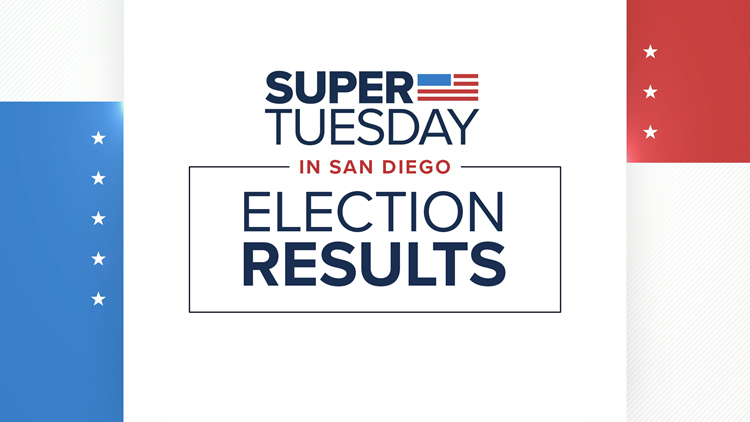 Here is a look at the races News 8 is closely following. Read more about each and find in-depth results at the links below as they become available.

With Mayor Kevin Faulconer on his way out due to term limits, six candidates were vying to replace him in Tuesday's election. Assemblyman Todd Gloria topped the field of candidates and will likely face off with City Councilman Scott Sherman in a November runoff. As of Wednesday, March 4, Sherman was beating his closest opponent Barbara Bry by a little over 3,000 votes. Read more >>>

The race to fill the vacated seat of Republican U.S. Rep. Duncan Hunter of California is now closer to being a two-man race. Two years after losing a bid to unseat Rep. Duncan Hunter, Democrat Ammar Campa-Najjar will head to a November runoff election likely against former Republican Rep. Darrell Issa, who seems to have narrowly outlasted fellow Republican Carl DeMaio in the race for second place. As of Wednesday, March, 4, Issa was leading DeMaio by nearly 3,000 votes. Read more >>>

The top two candidates have been decided in all five CA Congressional races that include San Diego and they will face off in the November election. Read more >>>

All five open city council races are set with 100% of precincts reporting. The top 2 in each race will meet in the November runoff election. Read more >>>

Board of Supervisors Races; districts 1, 2, and 3

With 100% precincts reporting, all three Board of Supervisors races are set. The top 2 in each race will runoff in the November election. Read more >>>

San Diego County housing development initiatives; Measure A and Measure B both fail

Two measures on the ballot for San Diego voters were aimed at making changes in the future of housing development in San Diego County. Wednesday morning vote totals show Measure B failing with Measure A narrowly failing by less than 10,000 votes based on the current results. Read more>>>

Californians voted on the widely talked about, and only statewide, Proposition 13 on Tuesday. This means voters will decide if the state should borrow $15 billion for school infrastructure. As of Wednesday night, 7% of precincts still needed to be counted but early numbers projected that the proposition would not pass. Read more>>>

Del Mar residents voted against the future plans to build a 65-room hotel with villas, affordable rental housing, and additional lodging for moderate-income guests, plus restaurants and more than a mile of trails. Read more>>>